A Descending Spiral: Exposing the Death Penalty in 12 Essays (Hardcover) 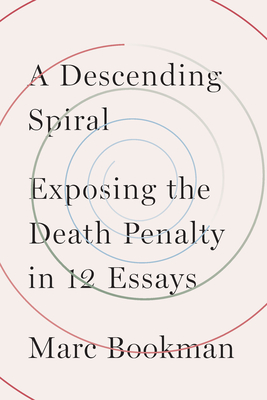 Powerful, wry essays offering modern takes on a primitive practice, from one of our most widely read death penalty abolitionists

As Ruth Bader Ginsburg has noted, people who are well represented at trial rarely get the death penalty. But as Marc Bookman shows in a dozen brilliant essays, the problems with capital punishment run far deeper than just bad representation. Exploring prosecutorial misconduct, racist judges and jurors, drunken lawyering, and executing the innocent and the mentally ill, these essays demonstrate that precious few people on trial for their lives get the fair trial the Constitution demands.

Today, death penalty cases continue to capture the hearts, minds, and eblasts of progressives of all stripes--including the rich and famous (see Kim Kardashian's advocacy)--but few people with firsthand knowledge of America's "injustice system" have the literary chops to bring death penalty stories to life.

Enter Marc Bookman. With a voice that is both literary and journalistic, the veteran capital defense lawyer and seven-time Best American Essays "notable" author exposes the dark absurdities and fatal inanities that undermine the logic of the death penalty wherever it still exists. In essays that cover seemingly "ordinary" capital cases over the last thirty years, Bookman shows how violent crime brings out our worst human instincts--revenge, fear, retribution, and prejudice. Combining these emotions with the criminal legal system's weaknesses--purposely ineffective, arbitrary, or widely infected with racism and misogyny--is a recipe for injustice.

Bookman has been charming and educating readers in the pages of The Atlantic, Mother Jones, and Slate for years. His wit and wisdom are now collected and preserved in A Descending Spiral.

Marc Bookman is the executive director of the Atlantic Center for Capital Representation, a nonprofit that provides services for those facing possible execution. Before that he spent many years in the Homicide Unit of the Defender Association of Philadelphia. He has published essays in The Atlantic, Mother Jones, VICE, and Slate. He lives in Philadelphia.