A Disorder Peculiar to the Country (Compact Disc) 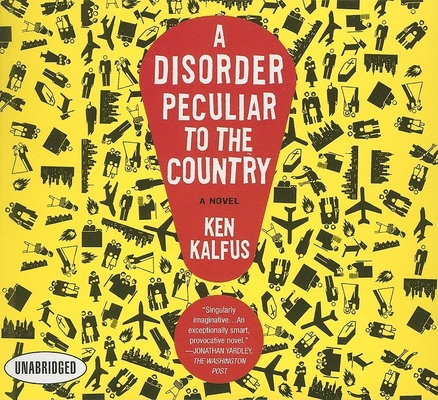 A rollicking dark comedy about terrorism, war and conjugal strife.

Joyce and Marshall Harriman are struggling to divorce each other while sharing a cramped, hateful Brooklyn apartment with their two small children. On the morning of September 11, 2001 Joyce departs for Newark Airport to catch a flight to San Francisco, and Marshall goes to his office in the World Trade Center. She misses her flight, and he's late for work, but on that grim day, in a devastated city, among millions seized by fear and grief, each thinks the other is dead and each is secretly, shamefully, gloriously happy.

Opening with a swift kick to our national piety, A DISORDER PECULIAR TO THE COUNTRY follows Joyce and Marshall as they swallow their mutual disappointment, their divorce conflict intensifies, and they suffer, in unexpectedly personal ways, the many strange ravages that beset America in the first years of the Bush regime. Joyce suspects Marshall has sent an anthrax-laced envelope to her office. Marshall taps her phone and studies plans for constructing a suicide bomb. The stock market crash and the war in Afghanistan, Abu Gharaib and the clash of civilizations: all become marital battlefields.

Concluding with the liberation of Iraq, A DISORDER PECULIAR TO THE COUNTRY astonishingly lampoons how our nation's public calamities have encroached upon our most intimate private terrors.

Ken Kalfus is the author of THE COMMISSARIAT OF ENLIGHTENMENTand THIRST which won the Salon Book Award and PU-239, and OTHER RUSSIAN FANTASIES, which was a finalist for the PEN/Faulkner Award. All of his books have been honored as New York Times Notable Books. He lives in Philadelphia with his wife and daughter.