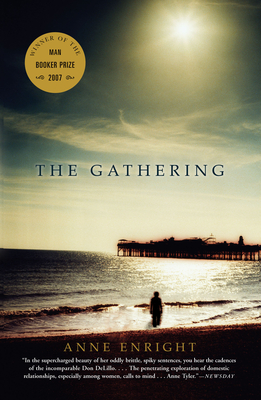 Anne Enright is a dazzling writer of international stature and one of Ireland's most singular voices. Now she delivers The Gathering, a moving, evocative portrait of a large Irish family and a shot of fresh blood into the Irish literary tradition, combining the lyricism of the old with the shock of the new. The nine surviving children of the Hegarty clan are gathering in Dublin for the wake of their wayward brother, Liam, drowned in the sea. His sister, Veronica, collects the body and keeps the dead man company, guarding the secret she shares with him--something that happened in their grandmother's house in the winter of 1968. As Enright traces the line of betrayal and redemption through three generations her distinctive intelligence twists the world a fraction and gives it back to us in a new and unforgettable light. The Gathering is a daring, witty, and insightful family epic, clarified through Anne Enright's unblinking eye. It is a novel about love and disappointment, about how memories warp and secrets fester, and how fate is written in the body, not in the stars.

Winner of the 2007 Man Booker Prize

Fierce and clear-eyed . . . a witty, scatological, and moving splendor of a novel. Enright’s language is percussive one moment, liquid the next, and always in the service of Veronica as we accompany her in her hobbled, painful steps toward self-reinvention.” Julie Wittes Schlack, The Boston Globe

There is something livid and much that is stunning about The Gathering. . . . Anger brushes off every page, a species of rage that aches to confront silence and speak truth at last. The book's narrative tone echoes Joan Didion’s furious, cool grief, but the richest comparison may be with James Joyce's Dubliners.” Peter Behrens, The Washington Post

Enright has written a wonderfully elegant and unsparing novel that takes the old Irish subjects of family dysfunction and the vagaries of memory into territory made fresh by an objectivity so precise it seems almost loving. . . . stunning control and flawless eye.” The Los Angeles Times

Entrancing, unflinching, and insightful. The Gathering is a haunting look at a broken family stifled by generations of hurt and disappointment, struggling to make peace with the irreparable.” Entertainment Weekly

Enright shows herself to be a clear-eyed investigator of the human condition, driven to pursue hard truths. . . . see if you find something startling, or heartbreaking, or perfectly true and wonderfully insightful, revealing itself on the next page.” The San Francisco Chronicle

A lyrical meditation on memory and connectedness involving three generations of an Irish family . . . dreamy . . . wise . . . like Ali Smith, Enright is an original.” Kirkus (starred review)

Such incredible sentences . . . it’s unlikely you’ll find a more precisely rendered depiction of the hypocrisy , minor hysterics, and comforting ritual of an Irish wake.” The Globe and Mail

Anne Enright’s style is as sharp and brilliant as Joan Didion’s; the scope of her understanding is as wide as Alice Munro’s; her sympathy for her characters is as tender and subtle as Alice McDermott’s; her vision of Ireland is as brave and original as Edna O’Brien’s. The Gathering is her best book.” Colm Toibin, author of The Master and Mothers and Sons

In the supercharged beauty of her oddly brittle, spiky sentences, you hear the cadences of the incomparable Don DeLillo. . . . The penetrating exploration of domestic relationships, especially among women, calls to mind . . . Anne Tyler.” Newsday

Delivers with sharp wit and a huge heart.” Elle

Enright skillfully avoids sentimentality as she explores Veronica’s past and her complicated relationship with Liam. She also bracingly imagines the life of Veronica’s strong-willed grandmother, Ada. A melancholic love and rage bubbles just beneath the surface of this Dublin clan, and Enright explores it unflinchingly.” Publishers Weekly

Anne Enright has all she needs in terms of imagination and technique and she’s a tremendous phrase maker.” Adam Mars-Jones, Observer

"It is clearly the product of a remarkable intelligence, combined with a gift for observation and deduction.” A.L. Kennedy, Guardian

[Anne Enright] is intelligent, curious . . . nothing Anne Enright picks up and examines can escape her hungry and insightful attention. And The Gathering is her best novel so far..the sudden heart-stopping moment when Enright describes something utterly familiar and quotidian and unremarkable, but does it in a way that makes you giggle or jump with the shock of recognition.” Irish Sun Independent

Despite some thematic similarities with Edna O’Brienboth perceptive of peculiarly Irish families and sexEnright is more interestingly placed among experimental, if otherwise diverse, Irish writers such as John Banville and Patrick McCabe this is an admirable novel.” TLS (UK)

A fresh, sophisticated take on the ever-popular dysfunctional family saga.” The Irish Times

Anne Enright turns a compassionate, unflinching gaze on the Hegarty family tree. She beautifully describes the way hurt can be inherited . . . Enright is a daring writerwitty, original and inventive . . . Utterly compelling.” The Daily Mail

A welcome update of the genre.” Telegraph (UK)

Abrasively honest and toweringly moving, it grabs and shakes you, rabitting on in a manic monologue, comical, tragic, lost and profound . . . compulsive, daring, concise and searing . . . Veronica Hegarty is Enright’s most stunning creation, so fully realised that the words simply melt into pictures and moods.” The Scotsman