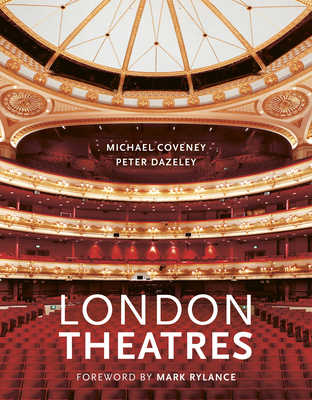 This fully revised and updated edition of the hugely successful London Theatres features ten additional theatres, including the Victoria Palace Theatre, the Sondheim Theatre, the Bridge Theatre and the Noël Coward Theatre.

London is the undisputed theatre capital of the world. From world-famous musicals to West End shows, from cutting-edge plays to Shakespeare in its original staging, from outdoor performance to intimate fringe theatre, the range and quality are unsurpassed.

Leading drama critic Michael Coveney invites you on a tour of more than 50 theatres that make the London stage what it is. With stories of the architecture, the people and the productions which have defined each one, alongside sumptuous photographs by Peter Dazeley of the auditoriums, public and backstage areas, this illustrated overview of London's theatres is a book like no other. A must for fans of the stage!

PETER DAZELEY FRPS, known as Dazeley, is a celebrated London photographer renowned for fine art and advertising  photography. He was born in West Kensington and studied photography at Holland Park School, now known as the Socialist Eton. His work has won many awards from organisations across the world, including the Association of Photographers and the Royal Photographic Society in the UK, EPICA in France, Applied Arts Magazine in Canada, and Graphis Inc. in the USA. Dazeley is a member of the Association of Photographers and a fellow of the Royal Photographic Society. Peter Dazely is the photographer of Unseen London, London Uncovered, London Theatres (all Frances Lincoln).

“According to the recently published new edition of Michael Coveney and Peter Dazeley’s seriously splendid book London Theatres, we’re promised massively enhanced technical facilities at Drury Lane, not least the ability to transform the auditorium into a 2,000-seat in-the-round space. Its Regency splendour restored, tiered levels of seating curved and the stalls seats brought forward for greater intimacy, the building’s every space within and without has been transformed. Coveney’s text is shot through with historical detail but his commentary is, above all, a labour of love, while Dazeley’s exquisitely evocative photographs of these pleasure palaces are frankly ravishing. Unless you happen to own one or more of these architectural jewels, you’ll never have the opportunity to see them in such glorious, glowing detail. Since we currently can’t enjoy them in person, get your hands on a copy and revel in what awaits us when theatre returns.”