A Prayer for the City (Paperback) 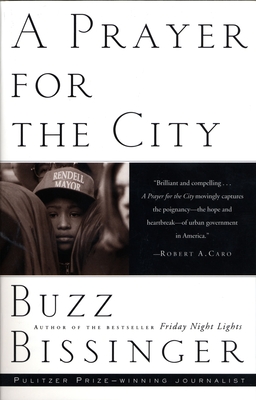 From the Pulitzer Prize-winning author of Friday Night Lights, the heart-wrenching and hilarious true story of an American city on its knees and a man who will do anything to save it.

A Prayer for the City is acclaimed journalist Buzz Bissinger's true epic of Philadelphia mayor Ed Rendell, an utterly unique, unorthodox, and idiosyncratic leader willing to go to any length for the sake of his city: take unions head on, personally lobby President Clinton to save 10,000 defense jobs, or wrestle Smiley the Pig on Hot Dog Day—all the while bearing in mind the eternal fickleness of constituents whose favor may hinge on a missed garbage pick-up or an overzealous meter maid. It is also the story of citizens in crisis: a woman fighting ceaselessly to give her great-grandchildren a better life, a father of six who may lose his job at the Navy Shipyard, and a policy analyst whose experiences as a crime victim tempt her to abandon her job and ideals. "Fascinating, humane" (The New Yorker) and alive with detail and insight, A Prayer for the City describes the rare combination of political courage and optimism that may be the only hope for America's urban centers.

Buzz Bissinger is the author of A Prayer for the City, the New York Times bestseller Three Nights in August, and Friday Night Lights, which has sold almost two million copies to date and spawned a film and a TV series. He is a contributing writer for Vanity Fair.

Praise for Buzz Bissinger's A Prayer for the City

"An extraordinary book, an insider's account of the daily workings of a big-city administration." —The New York Review of Books

"A fascinating, humane portrait of the ills of urban America." —The New Yorker

"A full-scale portrait of a struggling American metropolis that brings to mind such classics of urban reportage and analysis as J. Anthony Lukas's Common Ground and Nicholas Lemann's The Promised Land." —The New York Times Book Review

"Brilliant and compelling. A Prayer for the City movingly captures the poignancy—the hope and heartbreak—of urban government in America." —Robert A. Caro

"There has never been a better portrait of how a big city functions and how one mayor operates to push, pull, and prod the cement of bureaucracy as well as the souls of individual citizens toward a better place. This is actually more of a novel than it is current history, filled with insight and anecdotes that make you feel good about politics and people, too." —The Boston Globe