The Trouble With Physics: The Rise of String Theory, the Fall of a Science, and What Comes Next (Hardcover) 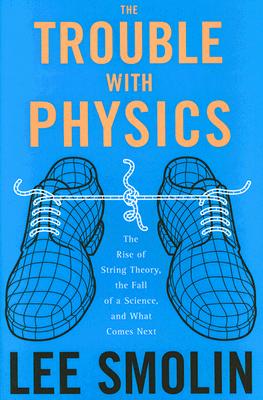 In this groundbreaking book, the renowned theoretical physicist Lee Smolin argues that physics — the basis for all other sciences — has lost its way. For more than two centuries, our understanding of the laws of nature expanded rapidly. But today, despite our best efforts, we know nothing more about these laws than we knew in the 1970s. Why is physics suddenly in trouble? And what can we do about it?

One of the major problems, according to Smolin, is string theory: an ambitious attempt to formulate a “theory of everything” that explains all the particles and forces of nature and how the universe came to be. With its exotic new particles and parallel universes, string theory has captured the public’s imagination and seduced many physicists.

But as Smolin reveals, there’s a deep flaw in the theory: no part of it has been tested, and no one knows how to test it. In fact, the theory appears to come in an infinite number of versions, meaning that no experiment will ever be able to prove it false. As a scientific theory, it fails. And because it has soaked up the lion’s share of funding, attracted some of the best minds, and effectively penalized young physicists for pursuing other avenues, it is dragging the rest of physics down with it.

With clarity, passion, and authority, Smolin charts the rise and fall of string theory and takes a fascinating look at what will replace it. A group of young theorists has begun to develop exciting ideas that, unlike string theory, are testable. Smolin not only tells us who and what to watch for in the coming years, he offers novel solutions for seeking out and nurturing the best new talent—giving us a chance, at long last, of finding the next Einstein.

"Bold, provocative, and, best of all, a joy to read." --Evelyn Fox Keller, Professor of the History and Philosophy of Science, MIT

"An uncommonly clear and confident account of the great obstacles—and opportunities—facing physics today. . . .engrossing and illuminating." --Tim Ferris, author of Coming of Age in the Milky Way and The Big Shebang

"[Smolin] exudes a love of science and imagination, and a faith in the next generation of young physicists." --Jaron Lanier, computer scientist and columnist for Discover

"[Smolin's] knowledge of [string theory] enables him to tell the story, and survey the road ahead, with clarity and grace." --Neal Stephenson, author of Snow Crash, Cryptonomicon, and Quicksilver

"Lee Smolin's understanding of theoretical physics is unusually broad and deep, and his critical judgments are exceptionally penetrating." --Roger Penrose, author of The Road to Reality and The Emperor's New Mind

"Lee Smolin has written an epic story with great energy and characteristic passion. . . .Thrilling." --Janna Levin, Barnard College of Columbia University, author of How the Universe Got Its Spots

"Clear, lively, and continuously interesting. . .Reading it is a very exciting experience and just what is needed at this time." --Kim Stanley Robinson, best-selling author of The Mars Trilogy

"Smolin offers a compelling argument. . . This is a well-written, critical profile of the theoretical physics community." Library Journal Starred