Fat Land: How Americans Became the Fattest People in the World (Hardcover) 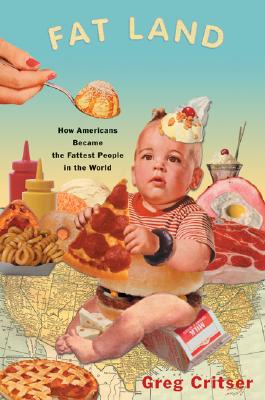 What in American society has changed so dramatically that nearly 60 percent of us are now overweight, plunging the nation into what the surgeon general calls an "epidemic of obesity"? Greg Critser engages every aspect of American life - class, politics, culture, and economics - to show how we have made ourselves the second fattest people on the planet (after South Sea Islanders).

Fat Land highlights the groundbreaking research that implicates cheap fats and sugars as the alarming new metabolic factor making our calories stick and shows how and why children are too often the chief metabolic victims of such foods. No one else writing on fat America takes as hard a line as Critser on the institutionalized lies we've been telling ourselves about how much we can eat and how little we can exercise. His expose of the Los Angeles schools' opening of the nutritional floodgates in the lunchroom and his examination of the political and cultural forces that have set the bar on American fitness low and then lower, are both discerning reporting and impassioned wake-up calls.

Disarmingly funny, Fat Land leaves no diet book - including Dr. Atkins's - unturned. Fashions, both leisure and street, and American-style religion are subject to Critser's gimlet eye as well. Memorably, Fat Land takes on baby-boomer parenting shibboleths - that young children won't eat past the point of being full and that the dinner table isn't the place to talk about food rules - and gives advice many families will use to lose.

Critser's brilliantly drawn futuristic portrait of a Fat America just around the corner and his all too contemporary foray into the diabetes ward of a major children's hospital make Fat Land a chilling but brilliantly rendered portrait of the cost in human lives - many of them very young lives - of America's obesity epidemic.

"An in-depth, well-researched, and thoughtful exploration of the 'fat boom' in America." -- Boston Globe Boston Globe

“Just perusing the book, and seeing the [obesity] problem presented in such an articulate and lucid manner, can’t help but make more informed food consumers out of readers.” -- Los Angeles Times The Los Angeles Times