Nothing to Envy: Ordinary Lives in North Korea (Paperback) 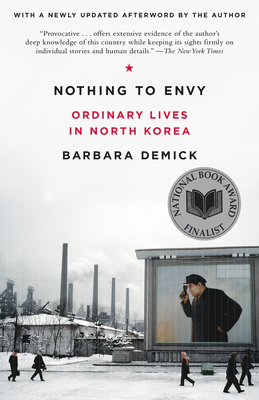 In this landmark addition to the literature of totalitarianism, award-winning journalist Barbara Demick follows the lives of six North Korean citizens over fifteen years—a chaotic period that saw the death of Kim Il-sung, the rise to power of his son Kim Jong-il (the father of Kim Jong-un), and a devastating famine that killed one-fifth of the population.

Demick brings to life what it means to be living under the most repressive regime today—an Orwellian world that is by choice not connected to the Internet, where displays of affection are punished, informants are rewarded, and an offhand remark can send a person to the gulag for life. She takes us deep inside the country, beyond the reach of government censors, and through meticulous and sensitive reporting we see her subjects fall in love, raise families, nurture ambitions, and struggle for survival. One by one, we witness their profound, life-altering disillusionment with the government and their realization that, rather than providing them with lives of abundance, their country has betrayed them.

Praise for Nothing to Envy

“Provocative . . . offers extensive evidence of the author’s deep knowledge of this country while keeping its sights firmly on individual stories and human details.”—The New York Times

“The narrow boundaries of our knowledge have expanded radically with the publication of Nothing to Envy. . . . Elegantly structured and written, [it] is a groundbreaking work of literary nonfiction.”—John Delury, Slate

“At times a page-turner, at others an intimate study in totalitarian psychology.”—The Philadelphia Inquirer

Barbara Demick is the author of Nothing to Envy: Ordinary Lives in North Korea, which was a finalist for the National Book Award and National Book Critics Circle Award and the winner of the Samuel Johnson Prize in the U.K., and Logavina Street: Life and Death in a Sarajevo Neighborhood. Her books have been translated into more than twenty-five languages. Demick is a staff writer for the Los Angeles Times and a contributor to The New Yorker, and was recently a press fellow at the Council on Foreign Relations.

“The narrow boundaries of our knowledge have expanded radically with the publication of Los Angeles Times correspondent Barbara Demick’s Nothing To Envy: Ordinary Lives in North Korea. . . . Elegantly structured and written, Nothing To Envy is a groundbreaking work of literary nonfiction.”–Slate

“Excellent . . . lovely work of narrative nonfiction . . . a book that offers extensive evidence of the author’s deep knowledge of this country while keeping its sights firmly on individual stories and human details.”–New York Times

“There’s a simple way to determine how well a journalist has reported a story, internalized the details, seized control of the narrative and produced good work. When you read the result, you forget the journalist is there. Barbara Demick, the Los Angeles Times’ Beijing bureau chief, has aced that test in “Nothing to Envy: Ordinary Lives in North Korea,” a clear-eyed and deeply reported look at one of the world’s most dismal places.’’–Cleveland Plain Dealer

“The ring of authority as well as the suspense of a novel.’’–Washington Times

“Excellent new book is one of only a few that have made full use of the testimony of North Korean refugees and defectors. A delightful, easy-to-read work of literary nonfiction, it humanizes a downtrodden, long-suffering people whose individual lives, hopes and dreams are so little known abroad that North Koreans are often compared to robots. . . . The tale of the star-crossed lovers, Jun-sang and Mi-ran, is so charming as to have inspired reports that Hollywood might be interested.”—San Francisco Chronicle

“In a stunning work of investigation, Barbara Demick removes North Korea’s mask to reveal what lies beneath its media censorship and repressive dictatorship.”–Daily Beast

“In spite of the strict restrictions on foreign press, awardwinning journalist Demick caught telling glimpses of just how surreal and mournful life is in North Korea. . . . Strongly written and gracefully structured, Demick’s potent blend of personal narratives and piercing journalism vividly and evocatively portrays courageous individuals and a tyrannized state.”—Booklist

“At times a page-turner, at others an intimate study in totalitarian psychology. Demick . . . takes us inside the minds of her subjects, rendering them as complex, often compelling characters—not the brainwashed parodies we see marching in unison in TV reports.”–Philadelphia Inquirer

“The last time I read a book with something truly harrowing or pitiful or sad on every page it was Cormac McCarthy’s The Road, and those characters had the good fortune to not be real.”–St. Louis Magazine