How to Be Alone: Essays (Hardcover) 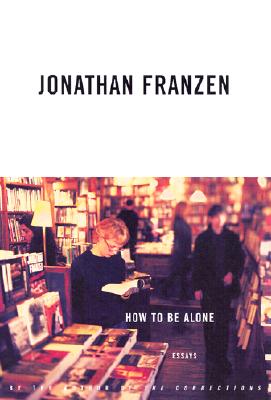 Passionate, strong-minded nonfiction from the National Book Award-winning author of The Corrections

Jonathan Franzen's The Corrections was the best-loved and most-written-about novel of 2001. Nearly every in-depth review of it discussed what became known as "The Harper's Essay," Franzen's controversial 1996 investigation of the fate of the American novel. This essay is reprinted for the first time in How to be Alone, along with the personal essays and the dead-on reportage that earned Franzen a wide readership before the success of The Corrections. Although his subjects range from the sex-advice industry to the way a supermax prison works, each piece wrestles with familiar themes of Franzen's writing: the erosion of civic life and private dignity and the hidden persistence of loneliness in postmodern, imperial America. Recent pieces include a moving essay on his father's stuggle with Alzheimer's disease (which has already been reprinted around the world) and a rueful account of Franzen's brief tenure as an Oprah Winfrey author.

As a collection, these essays record what Franzen calls "a movement away from an angry and frightened isolation toward an acceptance--even a celebration--of being a reader and a writer." At the same time they show the wry distrust of the claims of technology and psychology, the love-hate relationship with consumerism, and the subversive belief in the tragic shape of the individual life that help make Franzen one of our sharpest, toughest, and most entertaining social critics.

Jonathan Franzen won the National Book Award for Fiction for "The Corrections" in 2001, and is the author of two other""critically acclaimed novels, "The Twenty-Seventh City" and "Strong Motion." He is a frequent contributor to "The New Yorker "and "Harper's."

"A graceful meditation on reading and writing in a digital age . . . Franzen probes two very simple ideas: 'the movement away from an angry and frightened isolation toward an acceptance—even a celebration—of being a reader and a writer' and 'the problem of preserving individuality and complexity in a noisy and distracting mass culture.'"—Henry L. Carrigan, Jr., The Altanta Journal-Constitution

"Franzen believes the monolithic quality of the U.S. media, its jingoistic flattening of complex issues and the rush to hop on the information superhighway are a constant assault on the internal lives of Americans . . . These are essays about the pain of being an American in a time when the means to alleviating pain threaten to dehumanize pain itself, when the means for entertaining ourselves have become so sophisticated it's almost hard to complain. There's some boldness, then, in how Franzen reclaims his pain on the page, owning up to it and, as any good journalist will, making it our own, too."—John Freeman, The San Francisco Chronicle

"Although Franzen calls them 'essays' many of these pieces are reportage. He's good at it . . . All these pieces place both writer and reader on firm ground . . . He goes out on many a limb (as essayists should) and gives us a good many things to think about, such as the blurring line between private and public behavior in the age of the 24-hour news cycle."—Dan Sullivan, Minneapolis Star-Tribune

"If Franzen had not been anointed to the Higher Calling of Literature, he might have made a terrific journalist . . . Two of the reportage pieces are models of the New Journalism."—Roger K. Miller, South Florida Sun-Sentinel

"Franzen is a charming and sagacious writer, even an important one, a man who cares about literature and who cares about the problems of modernity—race, urban sprawl, corporate hegemony. Books matter, is the final message. A keen intellect is at work here, even though Franzen often seems to be arguing with himself; perhaps How to Be Alone is most brilliant when the author is arguing with himself. Jonathan Franzen has a restless mind and we are better for it."—Corey Mesler, The Commercial Appeal (Memphis)
2
"A collection of essays diverse and entertaining . . . Smart, solid, and well-paced: a pleasure for Franzen's many admirers."—Kirkus Reviews

"[Franzen] demonstrates his remarkable capacity for evaluating the American scene . . . The journalistic pieces included in the book show that Franzen ain't afraid to face facts . . . Essays covering the tobacco industry and the 2001 presidential election, as well as consumerism and the nature of privacy in America, offer rare evaluations of the modern world as we know it."—Bookpage