The Year of Eating Dangerously: A Global Adventure in Search of Culinary Extremes (Paperback) 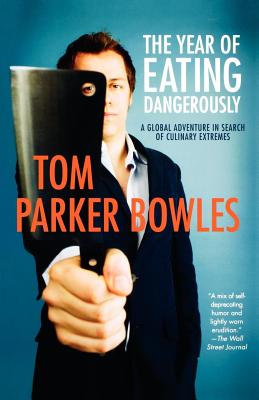 "A bracingly funny writer…Whether he's choking down dog stew in Korea or sipping cobra bile in China, Parker Bowles imbues his odyssey with self-deprecatory wit and sensitivity that make this travelogue a rare treat."--Entertainment Weekly

Tom Parker Bowles is a fiend for great flavor, and does not shy away from strange-looking, spicy, or otherwise "dangerous" foods whether in London or halfway around the world. Raised with a taste for fresh, simply prepared foods, he nevertheless was always intrigued by "exotic" foods, especially the kinds found in America--no Spanish or French food for him, thank you! "A chili freak who always carries a bottle of Tabasco" (People), Tom is no food snob.

His journey took him from the potentially lethal—fugu, the infamous poisonous blowfish —to the merely nauseating to the unexpectedly delectable. As he traveled through Asia and Europe, guided by friends and locals, he warily ate dog, snake, insects, offal, and a variety of sea creatures. In the United States, he ignored warnings from those who knew better as he eagerly stuffed himself with much too much barbecue in Tennessee and some of the hottest of the hot sauces at The National Fiery Foods Show in New Mexico. "Smart, stylish, erudite and hip in a sardonic, unmistakably limey sense--like a lost son of Nigella Lawson and Eddie Izzard" (Radar), Tom Parker Bowles makes even a cringe-worthy meal worth the trip.

Tom Parker Bowles, son of Prince Charles’ wife Camilla, is a respected British food critic, with columns in The Mail on Sunday, “Night and Day” and Tatler.  He is the author of The Year of Eating Dangerously and E is for Eating: An Alphabet of Greed. He lives in London.

“The Year of Eating Dangerously chronicles [Tom's] travels...in an attempt to acquire new experiences and eat like the natives do, and ultimately what makes it so engaging is that he only partly succeeds…his sense of humor is intact throughout and never sharper than when he's writing about himself…” —The New York Times

“A veritable culinary Odysseus...[Bowles] wins over his audience as a writer, describing dishes and sensations with the zeal of the recently famished, and his own hedonistic acts in delightful passages of unabashed bravado and self-deprecating humor” —Kirkus Reviews

“The book offers more than 'he ate what?' sensationalism; it also prods our culinary preconceptions.” —Boston Globe

“Tom Parker Bowles is nothing if not a charmer. From the first page...this reader was hooked.” —The Washington Times