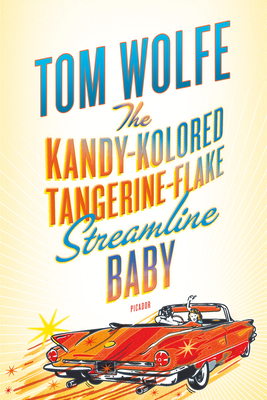 "An excellent book by a genius," said Kurt Vonnegut, Jr., of this now classic exploration of the 1960s from the founder of new journalism.

"This is a book that will be a sharp pleasure to reread years from now, when it will bring back, like a falcon in the sky of memory, a whole world that is currently jetting and jazzing its way somewhere or other."--Newsweek

In his first book, The Kandy-Kolored Tangerine-Flake Streamline Baby (1965) Wolfe introduces us to the sixties, to extravagant new styles of life that had nothing to do with the "elite" culture of the past.

Tom Wolfe (1930-2018) was one of the founders of the New Journalism movement and the author of such contemporary classics as The Electric Kool-Aid Acid Test, The Right Stuff, and Radical Chic & Mau-Mauing the Flak Catchers, as well as the novels The Bonfire of the Vanities, A Man in Full, and I Am Charlotte Simmons. As a reporter, he wrote articles for The Washington Post, the New York Herald Tribune, Esquire, and New York magazine, and is credited with coining the term, “The Me Decade.”

“Tom Wolfe is a terrific writer.” —The Washington Monthly

“Wolfe can do things with words and settings that few writers are capable of matching.” —Tom Walker, The Denver Post

“His eye and ear for detailed observation are incomparable; and observation is to the satirist what bullets are to a gun.” —The Boston Sunday Globe