Our Kind of Traitor: A Novel (Paperback) 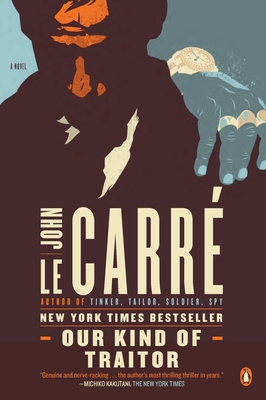 From the New York Times bestselling author of A Legacy of Spies.

In this exquisitely told novel, John le Carré shows us once again his acute understanding of the world we live in and where power really lies.

In the wake of the collapse of Lehman Brothers and with Britain on the brink of economic ruin, a young English couple takes a vacation in Antigua. There they meet Dima, a Russian who styles himself the world’s Number One money-launderer and who wants, among other things, a game of tennis. Back in London, the couple is subjected to an interrogation by the British Secret service who also need their help. Their acquiescence will lead them on a precarious journey through Paris to a safe house in Switzerland, helpless pawns in a game of nations that reveals the unholy alliances between the Russian mafia, the City of London, the government and the competing factions of the British Secret Service.

John le Carré was born in 1931. For six decades, he wrote novels that came to define our age. The son of a con man, he spent his childhood between boarding school and the London underworld. At sixteen he found refuge at the university of Bern, then later at Oxford. A spell of teaching at Eton led him to a short career in British Intelligence (MI5&6). He published his debut novel, Call for the Dead, in 1961 while still a secret servant. His third novel, The Spy Who Came in from the Cold, secured him a worldwide reputation, which was consolidated by the acclaim for his trilogy Tinker Tailor Soldier Spy, The Honourable Schoolboy, and Smiley’s People. At the end of the Cold War, le Carré widened his scope to explore an international landscape including the arms trade and the War on Terror. His memoir, The Pigeon Tunnel, was published in 2016 and the last George Smiley novel, A Legacy of Spies, appeared in 2017. He died on December 12, 2020.

“One of our great writers of moral ambiguity, a tireless explorer of that darkly contradictory no-man’s land…Our Kind of Traitor brims with deftly drawn characters navigating a treacherously uncertain landscape that seems ripped from yesterday’s papers and re-created with an absolutely certain hand.”—Tim Rutten, Los Angeles Times

“I would suggest immortality for John le Carré, who I believe one of the most intelligent and entertaining writers working today.”—The Chicago Tribune.