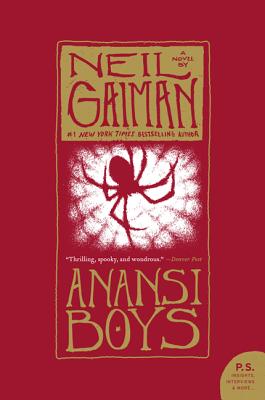 In this #1 New York Times bestseller, Neil Gaiman returns to the territory of his masterpiece, American Gods (now a Starz Original Series) to once again probe the dark recesses of the soul.

Fat Charlie Nancy’s normal life ended the moment his father dropped dead on a Florida karaoke stage. Charlie didn’t know his dad was a god. And he never knew he had a brother. Now brother Spider is on his doorstep—about to make Fat Charlie’s life more interesting . . . and a lot more dangerous.

“Awesomely inventive.… When you take the free-fall plunge into a Neil Gaiman book, anything can happen and anything invariably does.” —Entertainment Weekly

“Ebullient . . . The Gaiman faithful will devour it gratefully.”
— Sacramento Bee

“Somehow manages to be both really scary and really funny at the same time.”
— Newsweek

“The most accomplished of Gaiman’s novels . . . Urbane and sophisticated.”
— Time Out London

“An off-kilter blend of reality and fantasy.”
— Atlanta Journal-Constitution

“A droll comedy of manners with elements of mystery, thriller and romance thrown in . . . Charming.”
— Vancouver Sun

“Gaiman hardwires his comedy of misrule with a crackpot energy that, when successfully channelled, lights up the imagination.”
— Sunday Times (London)

“Another lovely story as only Gaiman can tell it; necessary and recommended.”
— Library Journal

“Funny and subversive . . . Gaiman’s mastery of language carries the reader through to a satisfying conclusion.”
— USA Today

“Delightful, funny and affecting . . . the literary equivalent of a hole in one.”
— Washington Post Book World

“A welterweight boxer of a book -- light on its feet, but capable of delivering a punch.”
— Atlanta Journal-Constitution

“[Gaiman] gives his flair for comedy free rein without losing his appreciation for the darker aspects of world mythology.”
— San Francisco Chronicle

“A hybrid of folk tale and farce that freely partakes of the comic wealth in each.”
— Salon.com

“Darkly funny and heartwarming to the end, this book is an addictive read not easily forgotten.”
— School Library Journal