White Guilt: How Blacks and Whites Together Destroyed the Promise of the Civil Rights Era (Hardcover) 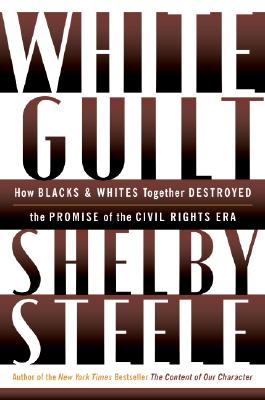 By Shelby Steele
Email or call for price.
Out of Stock Indefinitely

"Not unlike some of Ralph Ellison’s or Richard Wright’s best work. White Guilt, a serious meditation on vital issues, deserves a wide readership.” — Cleveland Plain Dealer

In 1955 the killers of Emmett Till, a black Mississippi youth, were acquitted because they were white. Forty years later, despite the strong DNA evidence against him, accused murderer O. J. Simpson went free after his attorney portrayed him as a victim of racism. The age of white supremacy has given way to an age of white guilt—and neither has been good for African Americans.

Shelby Steele is a research fellow at the Hoover Institution and Stanford University, and is a contributing editor at Harper's magazine. His many prizes and honors include the National Book Critics Circle Award, an Emmy Award, a Writers Guild Award, and the National Humanities Medal.

“For those who do not already know, this elegant essay will show why Shelby Steele is America’s clearest thinker about America’s most difficult problem. Braiding family memories with an acute understanding of national policies, he demonstrates what went wrong when whites for their reasons, and blacks for theirs, embraced the idea that white guilt explains blacks’ problems and can be the basis of policies for ameliorating them.”
— Newsweek

“With his characteristic honesty, clarity and hard-won wisdom, Shelby Steele exposes the social hypocrisies and racial lies that transformed the once promising post-civil rights era into a period of cultural decadence and mediocrity. We owe Citizen Steele our thanks. On questions of race in America—white guilt, black opportunism—he is our twenty-first century Socrates: the powerful, lucid and elegant voice of a refreshingly independent thinker who desires only to see us liberated from sophistry and self-destructive illusions.”
— Charles Johnson, author of MIDDLE PASSAGE, National Book Award winner

“There is no writer who deserves black America’s allegiance more than Shelby Steele... Steele’s writing is a marvel.”
— John McWhorter, National Review

“Breathtakingly insightful . . . Anyone concerned with the endless standoff that is black-white relations in this country has a duty to read Shelby Steele’s brief, brilliant new book, White Guilt.”
— Chicago Sun-Times

“Prophet or polemicist, Steele is a graceful and often compelling literary stylist . . . The effect is not unlike some of Ralph Ellison’s or Richard Wright’s best work. White Guilt, a serious meditation on vital issues, deserves a wide readership.”
— Cleveland Plain Dealer

“Piercing and personal... White Guilt is a brilliant little essay, deserving of a large and appreciative audience.”
— Washington Times

“As delightful a read as one can find on a book devoted to America’s historically most contentious topic. It is a true gift to find a work that combines a light tone and sharp anecdotes to make the reader repeatedly say, ‘Of course!’”
— New York Post

“Steele has given eloquent voice to painful truths that are almost always left unspoken in the nation’s circumscribed public discourse on race.”
— New York Times

“Psychologically brilliant. . . . An autobiographical meditation on why a significant portion of the black population hasn’t been able to take advantage of the freedoms that belatedly came to it.”
— New York Sun

“The cultural analysis of America’s loss of moral authority for its exposed racism has resonance today.”
— Booklist

“This is an essay. . . but it is no less valuable for that. . . . The struggle is far from resolved. And, as it continues, we are lucky to have Shelby Steele in it.”
— Weekly Standard